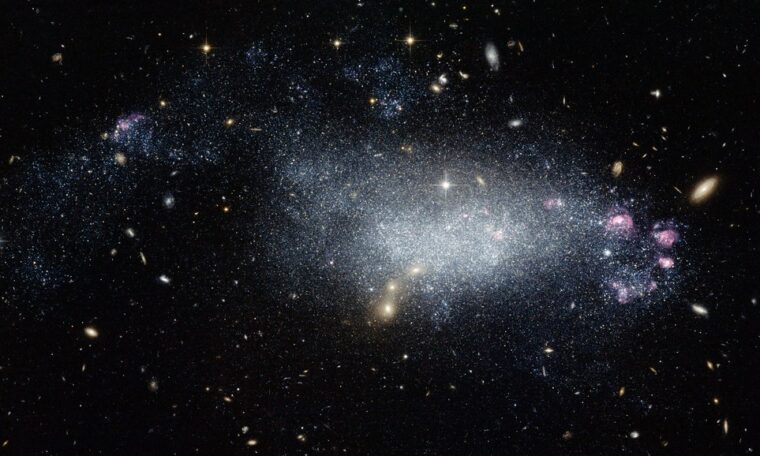 An international team of astronomers examined the data from ESA’s Gaia satellite and revealed a “ghostly” dwarf galaxy lurking outside the Milky Way. The object, called Ant 2, has so far avoided detection thanks to its very low density, as well as a perfectly chosen hideout, behind the Milky Way disc.

When the first space objects emerged in the early Universe, dwarf galaxies were the first galaxies that formed, and so most of their stars are old, low-mass, and metal-poor celestial bodies. But compared to the other known dwarf galaxies orbiting around Milky Way, Ant 2 is as massive as the Large Magellanic Cloud (LMC), and one-third the size of the Milky Way, our home galaxy. What makes Ant 2 even more unusual is the little light it emits as compared to the LMC it is 10,000 times dimmer.

“This is a ghost of a galaxy. Objects as diffuse as Ant 2 have simply not been seen before. Our discovery was only possible because of the quality of Gaia’s data,” explained Gabriel Torrealba, the study’s leading author.

The researchers behind the current study, gathered from Taiwan, the United Kingdom, the United States, Australia, and Germany, analyzed Gaia’s new data for Milky Way satellites using RR Lyrae stars. These stars are old and poor in metals, typical of those found in a dwarf galaxy. RR Lyrae stars change their brightness over a half-day period and can be located thanks to these well-defined pulses.

“The simplest explanation for why Ant 2 seems to have so little mass today is that the galactic tides of the Milky Way are disarming it. What remains unexplained, however, is the giant size of the object. Normally, when galaxies lose mass with the tides of the Milky Way, they shrink, they don’t grow,” explained Sergey Koposov from the Carnegie Mellon University.

“Compared to the rest of the 60 Milky Way’s satellites, Ant 2 is a weirdo. We wonder if this galaxy is just the tip of an iceberg, and the Milky Way is surrounded by a large population of almost invisible dwarf galaxies similar to this one,” said Matthew Walker, a researcher at the Carnegie Mellon University, and one of the study’s co-author.