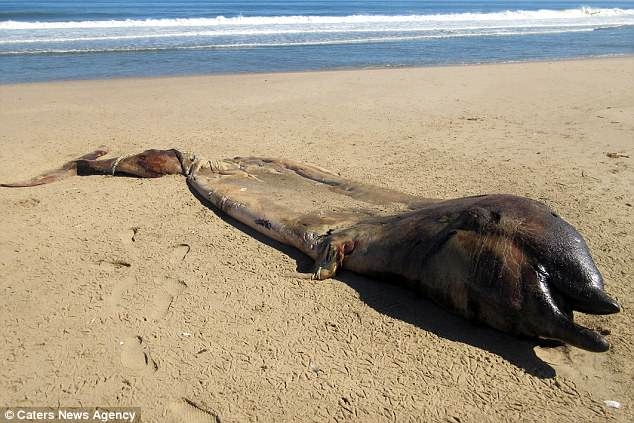 A strange sea monster was stranded last week off the coast of Africa. Specifically, the creature’s body was found on a beach in Namibia’s Dorob National Park. It is almost six meters long, and when scientists first saw it, the body was so decomposed that no one could tell if it was a dolphin, a whale or a still unknown species.

After studying the carcass for several days, measuring it thoroughly and examining the shape of its head, the researchers are now almost convinced that it is a specimen of Cuvier’s beaked whale, Zipius cavirostris, a creature that has not been seen in Namibia since 2000. At least this is what Simon Elwen, one of the scientists who found and studied the animal’s remains, said.

“I’m quite surprised. These animals are rarely seen in the water, so seeing them on land is quite unique,” Ewen told.

Cuvier’s beaked whales can be found in seas around the world, and tend to live in tropical and subtropical waters. They can weigh up to 3,000 kg and reach up to 7 meters in length, according to data from the U.S. National Oceanic and Atmospheric Administration (NOAA). They have a peculiar goose-like head, and a specific upwardly sloping jaw, a trait that NOAA says makes them look like they’re smiling.

The advanced state of decomposition of the unfortunate cetacean has made it impossible to determine the cause of death of this specimen. The jawbone was broken, something that researchers believe happened after the animal’s death, as it had no other visible injuries.

Cuvier’s beaked whales were included on the IUCN (International Union for Conservation of Nature) red list in 2008 as a species of “minor concern” (not particularly threatened). And not because they are not, but because they are so elusive that there is no reliable census of their population, estimated at around 100,000 worldwide.

In fact, the Cuvier’s beaked whales usually spend a lot of time in waters more than a thousand meters deep, where they hunt thanks to their refined echolocation system.