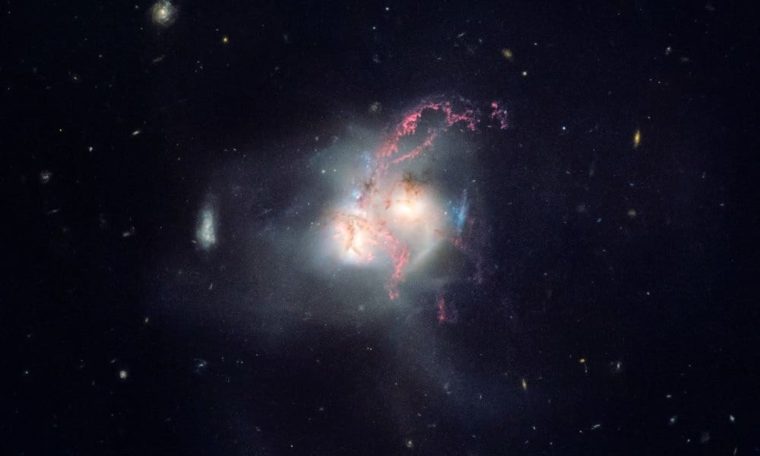 As reported by NASA, a merging of two galaxies takes about one billion years to complete. Now, NASA observed a black holes collision caused by the fusion of two galaxies followed throughout the past two decades by Hubble Space Telescope and W. M. Keck Observatory in Hawaii.

“Deep inside the dusty, messy cores of merging galaxies are pairs of black holes feasting on material and moving closer to coalescence,” says NASA on the official Hubble Space Telescope’s Twitter page.

“Two galaxies, under the inexorable pull of gravity, dance toward each other before finally joining together. Simulations reveal that galaxies kick up plenty of gas and dust as they undergo this slow-motion train wreck,” explained the US space agency in a statement.

As mentioned, over the past 20 years or so, the NASA/ESA Hubble Space Telescope and the W. M. Keck Observatory in Hawaii observed the merging of the two galaxies, which culminated with a spectacular black holes collision.

“Seeing the pairs of merging galaxy nuclei associated with these huge black holes, so close together was pretty amazing,” explained Michael Koss, a researcher at the Eureka Scientific Inc., and one of the scientists who studied the image released by NASA.

“The fact that black holes grow faster and faster as mergers progress tells us galaxy encounters are really important for our understanding of how these objects got to be so monstrously big,” also said Laura Blecha, a scientist at the University of Florida, referring to the fascinating black holes collision.

“A galaxy merger is a billion-plus-year process as two galaxies dance toward each other before finally joining together. Simulations reveal that galaxies kick up plenty of gas and dust as they undergo this slow-motion train wreck,” explained NASA Goddard the merging of two galaxies.