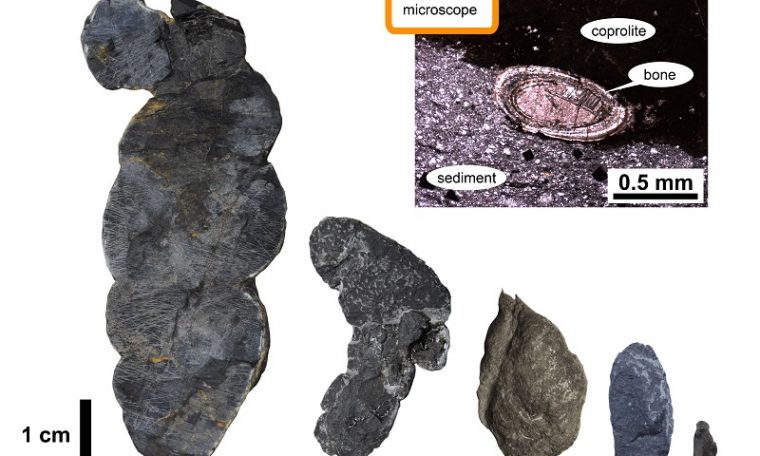 At the site of Las Hoyas, Spain, in addition to the remains of fossilized plants and animals, other significant records from the remote past are being studied: the coprolites. These fossilized feces, of great abundance and diversity, reveal that they belonged to Lower Cretaceous predators such as predator fish, crocodiles, salamanders, or even turtles.

It is rare for paleontologists to be able to document the vital processes of organisms that lived millions of years ago. This difficult task requires finding ichnofossils (recorded signs of the activity of living creatures in the past). Among these, the most common are ichnites or footprints but coprolites, or fossilized feces, can also be found.

In a paper published recently in the journal PLoS ONE, Spanish paleobiologists and geologists provide new information on the Lower Cretaceous.

“So far we have cataloged more than 1,500 coprolites. This is one of the best documented and complete records in the world of a continental wetland in the Lower Cretaceous,” say the researchers.

The fossilized feces were studied with non-destructive techniques. The researchers analyzed their chemical composition, noting that it is composed primarily of calcium phosphate. This would indicate that the coprolites belonged to carnivores, partly due to the decomposition of the apatite that forms part of the bones.

“What’s more, most of the bones included in the coprolites are fish bones, so it can be said that these predators were mostly ichthyophagous. This means that the predators that produced these fecal masses could have been other fish, crocodiles, salamanders, or even turtles,” said the scientists.

One of the conclusions of the researchers is that fossilized feces (coprolites) allow different types of dietary habits to be unveiled for the Lower Cretacious predators. Thus, the scientists made a clear difference between less effective digestive processes or less aggressive acid-enzymatic contents and more effective digestive strategies.