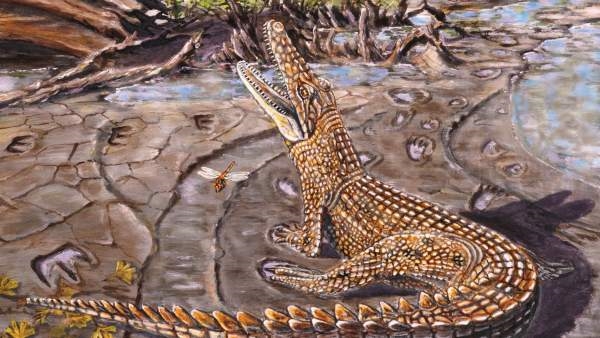 A new study on the 102 million-year-old crocodiles, the Isisfordia duncani or the Australian prehistoric crocodile, which lived in the Australian Northeast suggests that these reptiles lived in brackish waters, according to a recent study conducted by the scientists at the University of Queensland.

Scientists at the University of Queensland completed a forensic study of fossils of tiny crocodiles, the Isisfordia duncani, found in a brackish delta near the ancient Eromanga Sea, which occupied the interior of northeastern Australia. Until now it was known that the remains of these reptiles ended in these deltas but it was not known if they lived there or their bodies were dragged by the currents.

In the study, published by the journal Royal Society Open Science and led by Caitlin Syme, the scientists compared fossils of prehistoric crocodiles with those of modern specimens.

The experts relied on taphonomic techniques -that studies the death, deterioration, burial, and preservation of animals and plants- to predict the movement of the remains that were later fossilized.

The fossil of the Australian prehistoric crocodile, Isisfordia duncani, studied by researchers had broken bones suggesting it was dragged

“We counted what fossil bones and how many of them were present if they were still attached as they were when they were alive or if there were scratches or were broken,” said Syme a statement.

The expert explained that when a body floats in the water, it continues to deteriorate, causing parts of the skeleton to fall off and sink, and noted that if the fossil specimen studied had broken bones this would indicate that he was dragged dead before being buried.

“Both young and adult crocodile fossils are found on the site, suggesting that they were reproduced in these ancient deltas or very close,” Syme said.

The study also suggests that during the Cretaceous, the time in which this species lived, the central and western region of Queensland had a climate warm and humid enough so that these cold-blooded reptiles could live and reproduce.

The prehistoric Australian crocodile, which lived in Cretaceous and was named Isisfordia duncani in 2006, lived in brackish water and is considered the ancestor of modern crocodiles, lizards, and caimans, as well as the Ganges gharial.