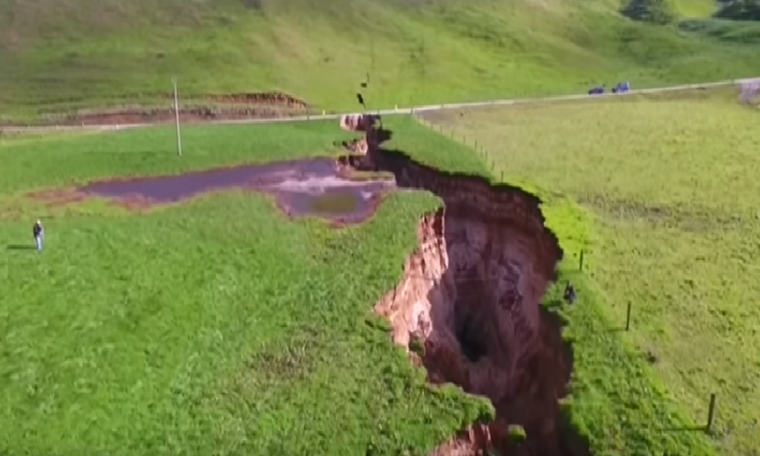 Just recently, the small town of Plenty Bay, in New Zealand, experienced the occurrence of a giant sinkhole of 200 meters long and 30 meters wide, which revealed something astonishing for the science community – a 60,000-year-old volcanic deposit.

The United States, Guatemala, China, Russia, and Chile are just some of the countries that have recorded a growing number of sinkholes phenomena in recent years.

Sinkholes are some sort of pits that form suddenly in the ground, sometimes for unexplained reasons, while sometimes they are linked to some natural conditions.

These phenomena have drawn the public attention, fascinating and terrorizing people, at the same time, in the affected areas. Some years ago, some cases were reported in the US, especially in Florida and California.

A 200-meter long giant sinkhole opened up in New Zealand, in the town of Plenty Bay

After heavy rains, the rift opened up on the land of a farm located in Plenty Bay, in New Zealand. According to initial reports, its length is about 200 meters and its width is about 20 to 30 meters.

However, this giant sinkhole helped scientists make a stunning discovery. Accordingly, this impressive abyss has revealed a 60,000-year-old volcanic deposit hidden under the soil of Plenty Bay. This phenomenon attracted researchers and vulcanologists to Plenty Bay.

Thus, many scientists rushed on the spot of the discovery to analyze the sinkhole and what is has revealed. The images went viral fast, reaching all over the world via social networks, blogs, and news sites.

According to the researchers, the size of the giant sinkhole in New Zealand should continue to grow in size the forthcoming years. To protect the locals and their animals, the authorities plan on installing a fence to prevent cattle from falling into the pit or any possible human casualities. Besides, the officials warned that more sinkholes could appear in this region of New Zealand during the next heavy rains.