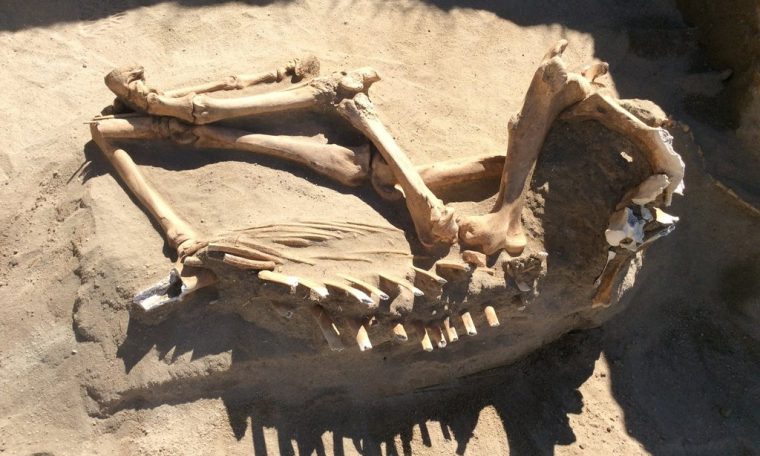 The discovery of an ancient horse fossil in a Utah backyard was a very interesting experience Bridger and Laura Hill has lived just recently. Once they’ve figured out about the importance of their discovery, they called for specialists. The paleontologists established that the carcass uncovered by a landscaping project was one of a Pleistocene horse.

Even more, the specialists even determined the cause of death. Allegedly, the ancient horse suffered from arthritis but was killed by bone cancer, a disease which is very common in horses over a specific age. However, this horse is 16,000-year-old.

The paleontologists admitted that this finding is special given the fact that a large part of the western part of the state was beneath water up to about 14,000 years ago.

Being buried for thousands of years beneath two meters of sandy clay, the remnants of this ancient horse were uncovered only when the Hill family started digging into their backyard to erect a levee wall and grow some turf.

Bridger and Laura Hill stated they uncovered the fossils in September 2017 but didn’t give it much importance since they thought they found a cow or something like that. After Bridger discussed the discovery with a neighbor, an ex-professor of geology, the latter studied the fossils and said they were from Pleistocene era.

After calling other experts, the discovery was finally elucidated – It was an ancient horse of 16,000-year-old, which lived in the Pleistocene era.

Utah is the “homeland” of fossils

Utah harbors many fossil deposits where dinosaurs and other Ice Age creatures have been spotted, including mastodons, saber-toothed tigers, and mammoths.

Species of horses crawled in Utah for the last 50 million years, according to Ross MacPhee from the American Museum of Natural History. However, discovering an ancient horse fossil from the Pleistocene era in a Utah backyard remains a surprising finding, almost similar to the 475-million-year old fossil of a trilobite found in eastern Tennessee by an 11-year-old girl.