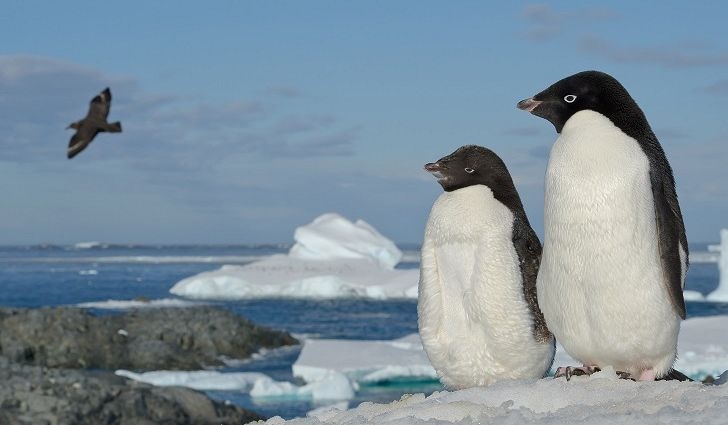 Global warming, which affects a third of the world’s avifauna, is the main threat to the survival of penguins, with 10 threatened species of the 18 that inhabit the planet. More importantly, there are 5 species of penguins on the brink of extinction.

These have been highlighted today by SEO/BirdLife on the occasion of World Penguin Day, which alerts the international community to the need to stop the main pressures on this group of birds, such as climate change, marine pollution, species invaders, and overfishing.

According to the latest report conducted by BirdLife International, the penguins, along with other rare bird species, suffer significant declines in their populations.

Galapagos, Adelie, and the Emperor Penguins are the most affected by global warming

The Galapagos penguin, the scarcest on the planet, with just over 1,200 specimens alive, is exposed to famine as a result of the warming of the oceans, which could lead to their extinction.

Climate change increase temperature in Antarctica, causing an unfavorable chain of events for penguins on the brink of extinction

“The Antarctic Peninsula is one of the areas on the planet where temperatures are increasing more rapidly, as in the last 50 years an increase of 0.5 degrees Celsius per decade has been observed,” explained Andres Barbosa, the researcher and the VP SEO/BirdLife.

Barbosa, who studies the link between climate change and the fall of populations of chinstrap and Adelie penguins, has indicated that global warming is responsible for the reduction of 80% of glaciers and the main organism of the Antarctic ecosystem, the krill species, which serves as food for the majority of Antarctic vertebrates.

For its part, the executive director of SEO/BirdLife, Asuncion Ruiz, has urged the international community to “redouble efforts to stop the progressive global warming,” otherwise, penguins on the brink of extinction will be killed.