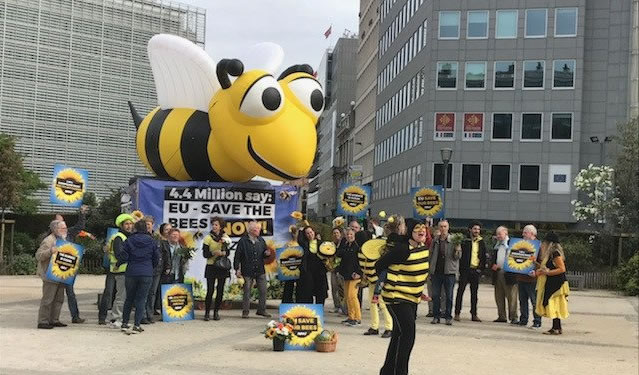 Clothianidin, imidacloprid, and thiamethoxam are neurotoxic substances that attack the nervous system of insects. Their future had been pending since 2013, after an initial negative assessment by the European Food Safety Agency (Efsa). These 3 neurotoxic products were already subject to significant restrictions but from now on, they are practically forbidden. Neonicotinoids, pesticides already restricted for use in the EU, will be completely banned after as they are blamed for the bees extinction.

The agency confirmed its opinion at the end of February, an assessment that supported the European executive’s desire to extend the ban. It now applies to all field crops, with the sole exception being the greenhouse uses, provided that all the seeds and plants do not leave their closed shelters.

Neonicotinoids may cause bees extinction, which may cause serious environmental problems

A qualified majority of Member States (at least 16 out of 28 countries representing 65% of the population) supported the Commission’s proposal at a committee of experts meeting this Friday morning, the European executive said in a short statement.

The Commission had proposed these measures months ago, on the basis of scientific advice from the European foods safety agency, which talked about the fact that these neonicotinoids may cause bees extinction.

Bees extinction has always been a crucial problem for the scientists, as it concerns biodiversity, food production, and the environment, as well. Besides, the extinction of the bees can endanger plants’ life, which will eventually endanger the human life.

Last October, the authorization of Closer and Transform, two insecticides manufactured by Dow AgroSciences whose active ingredient is sulfoxaflor, a “new neonicotinoid”, angered French beekeepers. The sale of the product was suspended a few weeks later.

Fortunately, the EU is banning the use of 3 neonicotinoids, namely, the clothianidin, imidacloprid, and thiamethoxam, which may cause bees extinction, which, at its turn, may cause serious environmental problems.