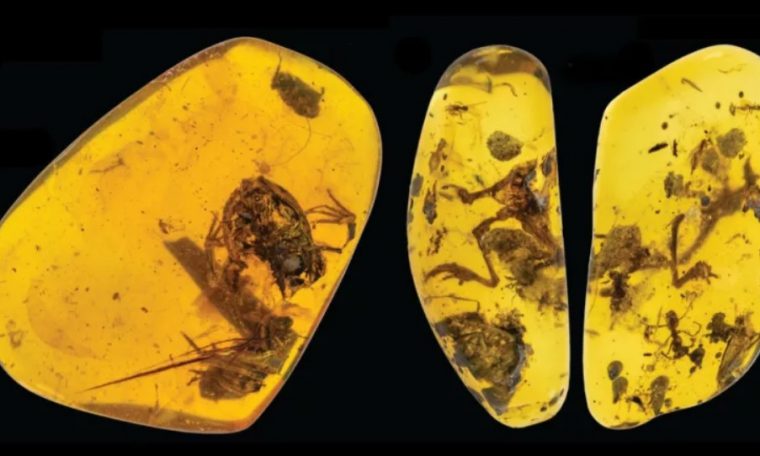 A new study, recently issued in the Scientific Reports journal, talks about the discovery of the most ancient frogs ever found, captured in amber. This finding is, on the other hand, the earliest proof that these amphibians inhabited rainforests about 200 million years ago. Also, this finding is of great importance because fossilized amphibians from that period are a rarity and now scientists had the unique opportunity to study ancient frogs which are 200 million years old.

“Frogs are common animals to encounter in the wet tropical forests of today, and easily more than a third of the nearly 7,000 species of frogs live in these wet forests. But being small and living in a tropical forest also means that your likelihood of ending up in the fossil record is pretty low,” said David C. Blackburn, one of this new study’ co-authors.

David C. Blackburn, accompanied by Linda Xing, a researcher at the University Of Geosciences in China, examined the four excellently preserved ancient frogs fossils captured in amber, discovered in northern Myanmar (also called Burma in the past).

The ambers which encaptured the frogs also contains traces of plants, mollusks, spiders, and other insects, and for Blackburn and Xing they are like time traveling thanks to the massive amount of information these fossils could offer about how was the animals’ lives about 200 million years ago.

“The forests in which this amber formed was probably a wet tropical forest with freshwater streams or ponds and located somewhere near the beach. We know this through the diversity of invertebrates and plants found in other pieces of amber. In many ways, this tropical ecosystem seems to resemble wet tropical forests that we have today,” explained Blackburn.

The discovery of the four most ancient frogs captured in amber is also essential because these specimens represent, in fact, the oldest frogs fossils ever found.

The scientists studied the ancient frogs and concluded that the frogs hadn’t changed much in the last 200 million years.