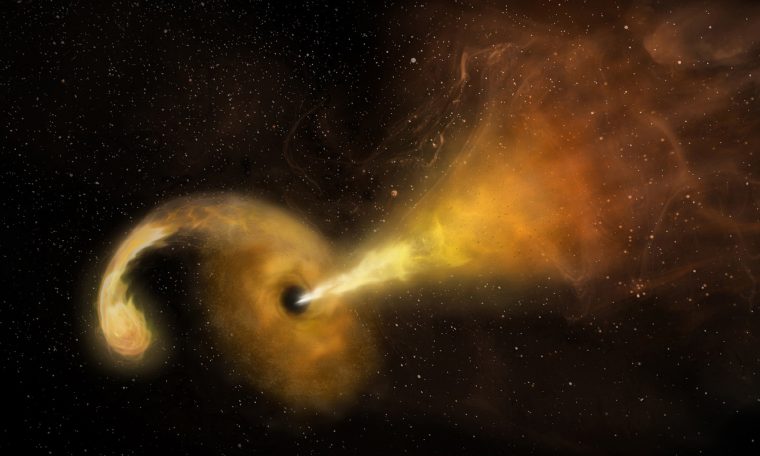 Scientists from the Spanish National Research Council and the University of Turku (Finland) have for the first time observed the formation and expansion of a jet of material spit directly by a supermassive black hole after “eating” a star, reported Health Thoroughfare.

In January 2005, in the nucleus of the merging galaxies Arp 299, situated at almost 150 million light years from Earth, a bright flash was detected that was considered a supernova explosion.

Monitoring that space region with an international network of radio telescopes, including the European Interferometry Network (EVN), for more than a decade, allowed scientists to see the flash detected at radio wavelengths expand in one direction at a speed of about 75,000 kilometers per second, a quarter of the speed of light.

The combination of observations at different wavelengths during this time allowed the team to rule out scenarios such as a supernova explosion or gamma-ray bursts.

The team determined that the most plausible explanation was that the supermassive black hole at the center of one of the two merging galaxies, with about 20 million solar masses, would have torn apart a star with a mass between two and six times that of the Sun.

According to theoretical models, in tidal disruption events, in which a black hole tears a star, half of the star’s mass is expelled into space, while the other half is absorbed by the supermassive black hole. The sudden injection of material produces a bright flash, followed by transient radio emissions and the formation of a jet of material that initially moves at speeds very close to that of light.

As Perez-Torres from the Spanish National Research Council explains, supermassive black holes spend a great deal of time without devouring anything, so they are not particularly active. Therefore, tidal disruption events, such as the one recently recorded, offer a unique opportunity to study the vicinity of these powerful objects.