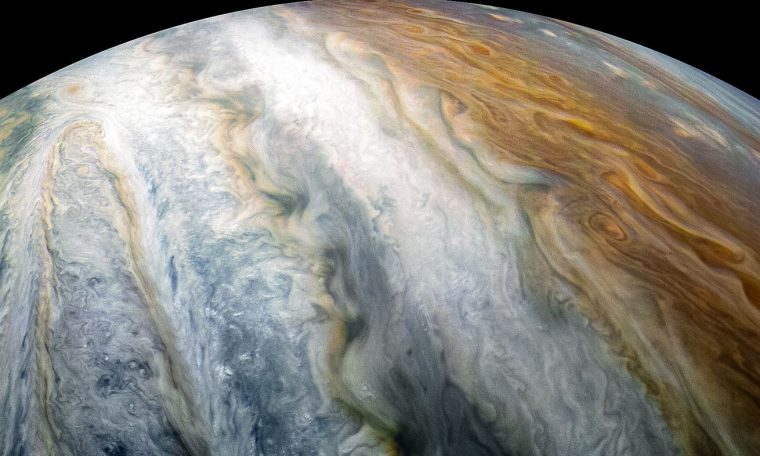 The series of images were taken during the tenth approach of the probe to the planet. NASA has shared some images captured during its tenth approach to the planet Jupiter in which a figure that resembles a “ghost” is seen, reports the official page of the Juno Mission. NASA posted on Junos’ page on Twitter a GIF showing the so-called STB Ghost on Jupiter.

The animation is the product of the combination of two color images taken on December 16th, 2017, by the Juno probe at a difference of 12 minutes between them.

The images were taken on the South Tempered Belt (STB). The two photos were captured successively when the probe was over at a distance of 13,604 and 30,970 kilometers above the planet’s clouds.

I ain’t afraid of no ghosts ??

This time-lapse animation of two true-color images captures the cyclonic motion of a feature called STB Ghost in the southern hemisphere of #Jupiter. https://t.co/euIhZdiZ6E pic.twitter.com/7KTTAeY4sD

In the center of the image, processed by the amateur scientist Bjorn Jonsson, stands out an elongated shape resulting from a cyclonic movement in an east-west direction. This phenomenon has been given the name of “STB Ghost” because of its similarity to a spectrum.

The Juno mission was launched in 2011 and reached Jupiter five years later, in 2016.

The space probe revolves around the gas giant in an elliptical orbit, collecting data from that planet. Scientists hope that this information will help to better understand how Jupiter and the solar system as a whole were formed and evolved.

Until now, Juno has sent spectacular images depicting Jupiter’s atmosphere storms, massive cyclones, data on the planet’s Great Red Spot, and many more. All these images, along with the Juno’s reading helped scientists learn many interesting things about the Jupiter’s atmosphere and surface.

From July 2018, Juno will no longer send stunning images such as this “STB Ghost” on Jupiter or one of Jupiter cyclone storms because then the probe will plunge into the Jupiter’s atmosphere to send the last data about the gaseous giant’s atmosphere before sacrificing itself in the name of science.