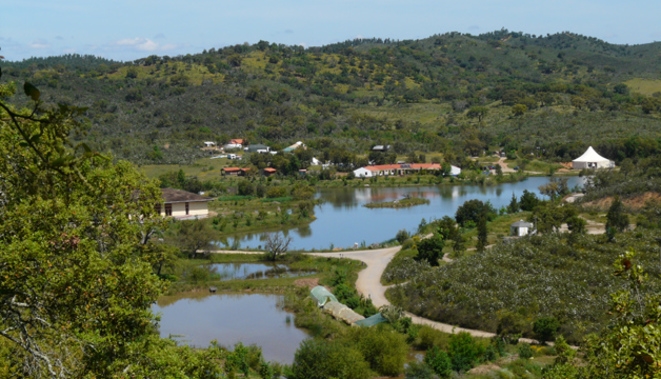 The eco-village of Tamera, Portugal, was founded in 1995 on 134 hectares of land. On the territory of this community, the greenery surrounding the large lake contrasts sharply with the drought of the surrounding landscape due to climate change.

The idea behind this village comes from a group of activists whose wish is to understand the origin of conflicts between human beings. To prove that a different society exists but especially to live there, this same group has embarked on the construction of a new society based on non-violence and cooperation between all living beings and nature.

The village of Tamera, Portugal, is located in the heart of an arid zone, the first challenge of its installation was the restoration of this desert territory. For this, the inhabitants have relied on permaculture techniques to cultivate, grow, and produce their own food while integrating their activities into the water cycle.

Thus, abundant vegetation could be reintroduced on a soil which was very damaged by the harmful years of monoculture and the lack of water.

A lake was created using the “water retention landscape” technique, which consists of the creation of interconnected retention areas of varying sizes and in which rainwater can be collected through a built micro-dam from natural materials. The water can then infiltrate into the ground, feed the water table, and allow the reappearance of the vegetation.

The techniques implemented in Tamera have allowed the return of water to the soil and have revived an entire ecosystem while allowing to meet the water needs of the population.

Other lakes were subsequently developed, the ambition of the inhabitants of Tamera now being that all winter precipitation falling on the eco-village is infiltrated into the ground or stored in the lake and to allow irrigation crops, as well as the emergence of springs and streams.

Climate change is intrinsically linked to water, both in its causes and its effects.

The climate change consequences are well-known, namely, drought, desertification, extreme storms, and other climatic disasters related to the surplus or the lack of water.

In terms of causes, however, human activities are responsible for many disturbances in the water cycle, thus contributing to climate change at the local and global levels.