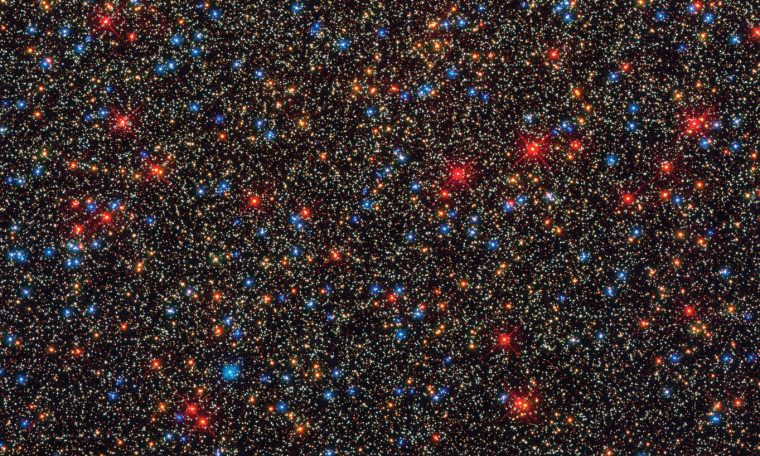 NASA Hubble Space Telescope captured a stunning panoramic image of 100,000 space objects residing in the nucleus of a giant globular cluster. Within the colorful assortment of stars captured by Hubble’s wide field camera 3, you can see Omega Centauri, located about 16,000 light years away from Earth, which has nearly 10 million stars.

A globular cluster is an ancient swarm of stars united by gravity and are the “colonist” of the Milky Way.

Situated in the constellation Centaurus, Omega Centauri globular cluster looks like a small cloud in the southern sky

The stars in the globular cluster immortalized by NASA Hubble Space Telescope are between 10 billion and 12 billion years old. Additionally, as the National Aeronautics and Space Administration (NASA) explained, out of the approximately 200 globular clusters orbiting the Milky Way, the Omega Centauri is one of the largest and most massive ones.

In addition to being one of the few globular clusters that can be seen with the naked eye, it is located in the constellation Centaurus and it resembles a small cloud in the southern sky and could easily be confused with a comet.

Situated in the constellation Centaurus, Omega Centauri globular cluster resembles a small cloud in the southern sky, which could easily be confused with a comet.

According to an article which you can read here, NASA has recently released a series of pics which were taken by Hubble. These pics were added into a very massive catalog which holds about 50 galaxies found at 60 million light-years away from Earth, 39 million blue, hot stars, as well as 8000 stars clusters.

These images released by NASA are of a great importance for scientists, as well as for any passionate astronomer who wants to enjoy the beauty of the deep space.