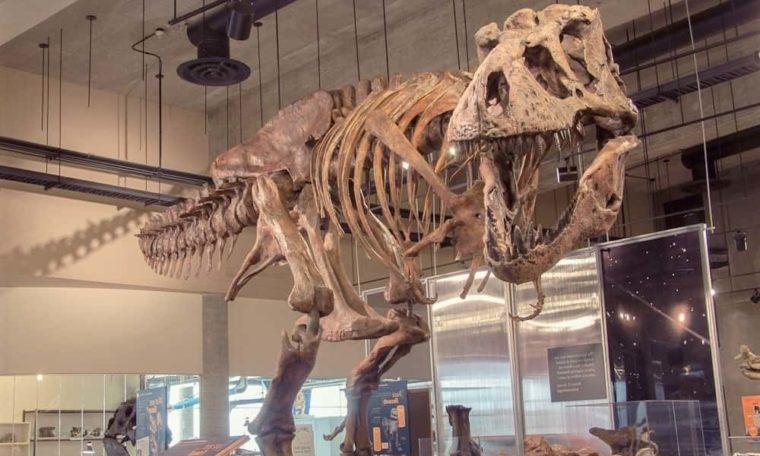 Sue from Chicago has been officially dethroned by Scotty from Saskatchewan as the largest Tyrannosaurus Rex ever discovered by scientists, so far. In 1991, a high school teacher and some paleontologists with the Royal Saskatchewan Museum who were out in search of fossils found Scotty’s skeleton in the badlands just outside of Eastend.

This specimen might be one of the complete T-Rex skeletons ever found, as 65 percent of it is intact. According to an article in a scholarly journal, now Scotty should receive the title of the most massive Tyrannosaurus Rex in the world. A postdoctoral researcher at the University of Alberta’s Department of Biological Sciences, Scott Persons, was pulled into a project that compared all the T-Rex dinosaurs ever unearthed.

A paper has been published by Gregory Erickson and Philip Currie along with Persons in The Anatomical Record Thursday announcing that the new status of Scotty is the king among kings of the dinosaurs. “The difference between them is only about 400 kilograms in Scotty’s favor,” Persons said, comparing Sue from Chicago and Scotty.

Researchers discovered Scotty, the largest Tyrannosaurus Rex in the world, in Saskatchewan, Canada.

Sue from Chicago was only 12.3 meters long while Scotty exceeds her by 0.7 meters. Scotty has been discovered by Persons and his team to have not lived a comfortable life. He had some broken ribs and an infection in his jaw. In addition to that, Sue weighed only about 8,400 kilos, while Scotty, the largest Tyrannosaurus Rex in the world now, was weighing approximately 8,800 kilos.

“It has got severe damage to a portion of its tail which may be the result of a bite wound from another Tyrannosaurus Rex,” Persons said, “Scotty lived a violent life.” The gender of Scotty remains unknown, but, according to Persons, the dinosaur was 30 years old when it died.

“The name Scotty comes from the celebration that was held after the skeleton was first found in the field. The crew wanted to raise a glass to Scotty, and at that point, the only suitable spirits they had left was an old bottle of scotch,” concluded Scott Persons.