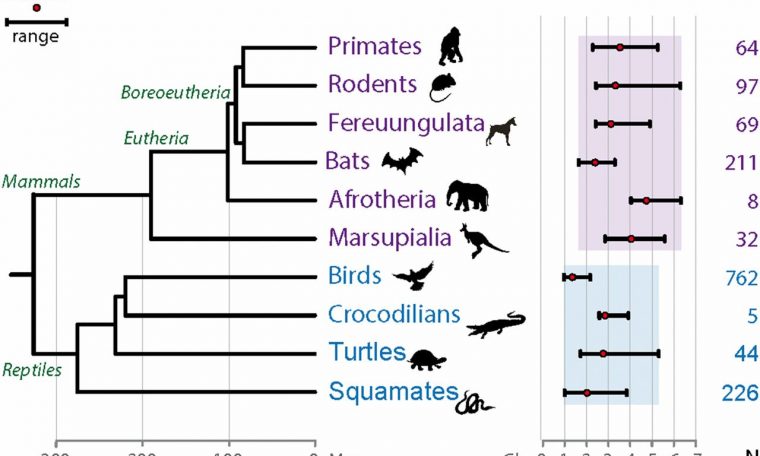 A recent study has revealed that the general dinosaur genome structure has been uncovered by contrasting genome of birds and genome of turtles. This recent research implied the extrapolation of the possible genome structure of a commonly known ancestor of birds and turtles which existed approximately 260 million years ago, with about 20 million years before the emergence of dinosaurs.

The study was carried out in the work lab of Professor Darren Griffin of the University of Kent’s School of Biosciences and has been issued in the journal Nature Communications.

Becky O’Connor, a postdoctoral senior investigator and co-author of the research article, followed how chromosomes evolved over time since the reptilian ancestor to its modern-day “offsprings”.

The research team uncovered that even though each individual chromosome was reorganizing its genes inwardly, this event did not take place at all between all chromosomes, a fact that researchers called “a significant discovery.”

Birds and turtle genomes show traces of dinosaur genome, indicating that they had a common ancestor

Birds, that are considered the living descendants of the dinosaurs, possess more chromosomes in comparison to the majority of the other species, thus, this would be one reason why the birds present such a diversity.

This study hints that the chromosome structure, the karyotype, found in early and later emergent dinosaurs and theropods is comparable to that of the majority of birds and, again, could contribute to their great diversity. Also, this new breakthrough indicates that if researchers had had the chance to make a chromosome makeover out of a theropod dinosaur, it would have been very close to that of a contemporary ostrich, duck or chicken.

Part of the key components of biotechnology that helped this to be possible was the creation of a collection of fluorescent samples obtained from birds that functioned well within the chromosomes of turtles.

Therefore, the scientists concluded that traces of dinosaur genome are still “living” in birds genome and turtle genome, suggesting that both these modern-day species possessed a common ancestor.