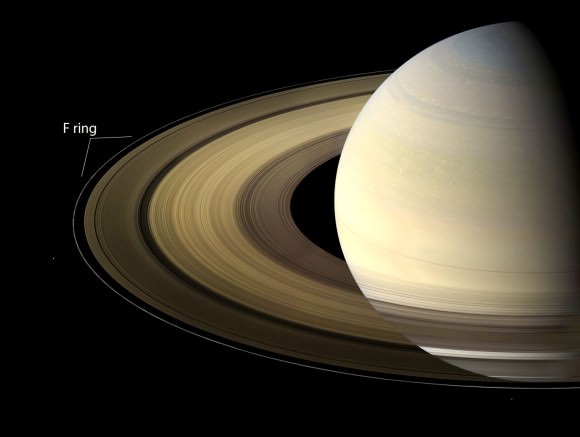 The European Space Agency (ESA) published a photograph taken by the Cassini spacecraft, where Saturn’s rings appear to be intertwined. The snapshot shows the rings almost 400,000 kilometers wide, which pass in front of the planet, on which they cast their shadow. Saturn’s rings have complex and detailed structures, which can be seen in the image.

According to ESA, in certain cases, the cause of the divisions and sub-rings is known, for example, the 28-kilometer-wide moon Pan, which is seen near the center of the image, is responsible for the division of Encke, a hole within Saturn’s Ring A.

However, in other cases, the origins and nature of the divisions and sub-rings are not easy to understand.

The Cassini probe’s camera looked at the illuminated face of the rings at about 14 degrees above their plane when the snapshot was taken on February 11th, 2016.

The image was taken 1.9 million kilometers away from the Saturn’s moon Pan and with a Sun angle of 85 degrees.

Although the Cassini mission has ended on September 15th, 2017, after 13 years of orbiting Saturn, the planet’s rings, and its moons, both ESA and the National Aeronautics and Space Administration (NASA) continue to reveal images of the second-largest planet of our Solar System.

Among the pics galleries that ESA released over time is a photograph of Dione, one of the Saturn’s moons, as it moves before the rings of the planet, which look like a thin strip.

Also, among all these pics, ESA also released a snapshot showing the exact location where the Cassini probe entered into the Saturn’s atmosphere, where the probe has ended its mission.

Check the Saturn’s crisscrossed rings photo and others here.