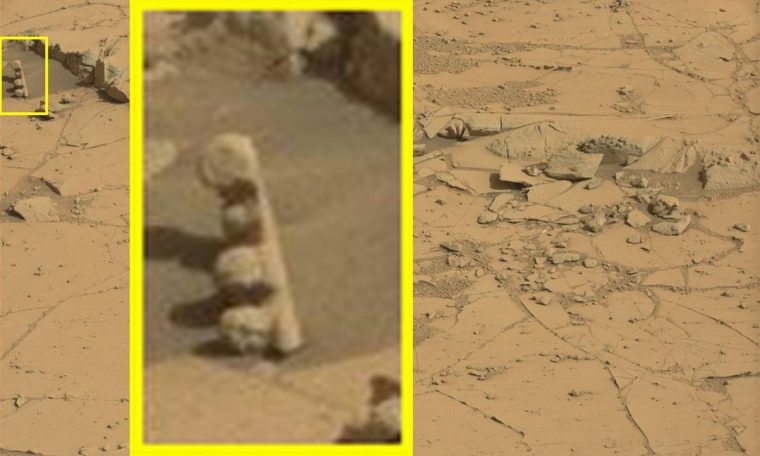 About 6 years ago, NASA’s Curiosity Rover landed on Mars, the Earth’s neighbor located at more than 75 million kilometers away from us. Since its first days, Curiosity has sent back home many cool images and very important readings that help scientists shed more light on the things going on the Red Planet. But, sometimes, the images sent by Curiosity ignited the imagination of people who found some bizarre thing that shouldn’t exist on Mars, from a pyramid to a bizarre bright light on Mars. Of course, some people think these are irrefutable pieces of evidence that an ancient alien civilization has lived on the Red Planet millions of years ago.

A perfectly-shaped pyramid on Mars

A pic of a pyramid on the Red Planet, taken on May 7th, 2015, also aroused much interest.

While most people think that it is simply a stone that has the shape of a pyramid, conspiracists believe that it could be the sign of an ancient alien civilization. Many ufologists believe that its perfect shape would mean that the pyramid on Mars is the result of intelligent design and certainly not an optical illusion.

NASA’s Curiosity Rover captured a bizarre photo in 2014 showing a burst of bright light on Mars’ horizon. The image thrilled the UFO fans who speculated about the source of the light, wondering if it might be evidence of extraterrestrial activity or, at least, a sign left behind by an ancient alien civilization.

However, the NASA scientist Doug Ellison ruined all extraterrestrial hope by explaining that this bright light on Mars was probably caused by a cosmic ray shock, the result of high-energy particles flying in space.

An alien skull on the Red Planet

One of the most recent images from NASA’s Curiosity Rover depicts what alien hunters have called an “alien skull”.

But this is no ordinary alien skull on Mars because this one looks like Bigfoot’s head. This observation comes from the YouTube Paranormal Crucible channel which wrote that “a strange object found by the rover seems to resemble a large skull, obviously extraterrestrial in nature – could it be the remains of a Sasquatch or a strange Martian creature?”

Definitely, NASA’s Curiosity Rover has sent home some very interesting and bizarre images. I let you draw your own conclusions on these ones.