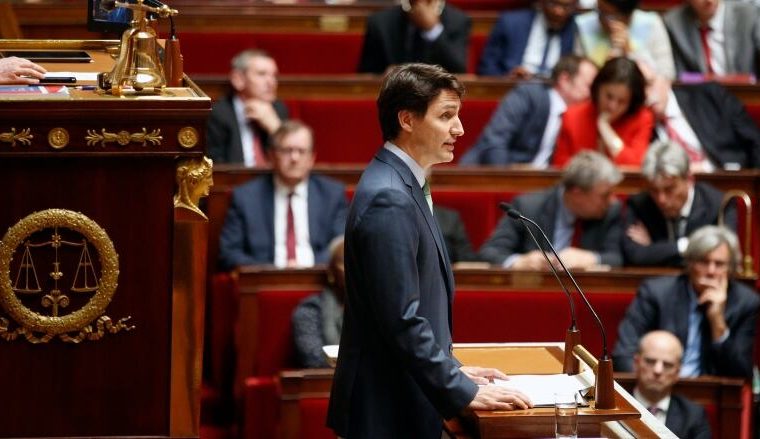 During his first official visit to France, Justin Trudeau spoke to the French Assembly today. From the climate change and global warming, gender equality to the economy, the Canadian Prime Minister has highlighted his convergences with Mr. Macron.

“Let us revive the humanist values”, proclaimed Justin Trudeau in front of the French deputies. The Canadian Prime Minister spoke to the National Assembly as part of his first official visit to France.

In a 40-minute speech, he chose to circumvent cynicism, asserting himself for diversity, immigration, or even gender equality.

Justin Trudeau was the first Canadian head of government to engage in this exercise, to which only about 20 foreign officials have been invited since the beginning of the Fifth Republic in 1958.

Trudeau pointed out the importance of the fight against climate change

Justin Trudeau made it a point of honor to emphasize the convergences with Emmanuel Macron. With the French president, Justin Trudeau recognizes common visions on issues of diplomacy, Francophonie, climate change, and free trade.

He extolled the merits of CETA, the new trade deal between the EU and Canada, much criticized by the “left” and the environmentalists, saying it is a “progressive trade” agreement, which takes into account the interests of the citizen.

The Canadian Prime Minister insisted that the agreement exempts the cultural industry, an essential point for France.

Another point of agreement is the G7 Summit, chaired by Canada this year, which will be under the watch of a Gender Advisory Council led by Melinda Gates, Co-Chair of the Foundation Bill and Melinda Gates, and Isabelle Hudon, Canada’s ambassador to France.

“Rarely has a visit been so consensual,” said Bruno Daroux, a journalist for France 24.

“Justin Trudeau and Emmanuel Macron are really on the same page in many areas. It was known since the beginning of the visit of Justin Trudeau,” Bruno added.

On April 16th, the Canadian Prime Minister met Emmanuel Macron for a working lunch, followed by a press conference at which the two had posted their convergences.

Today, in conclusion, Justin Trudeau opted to talk about more Franco-Canadian convergences and to point out some of the most important aspects in which the two countries are on the same page, including climate change and global warming, gender equality, and immigration tolerance, and more.