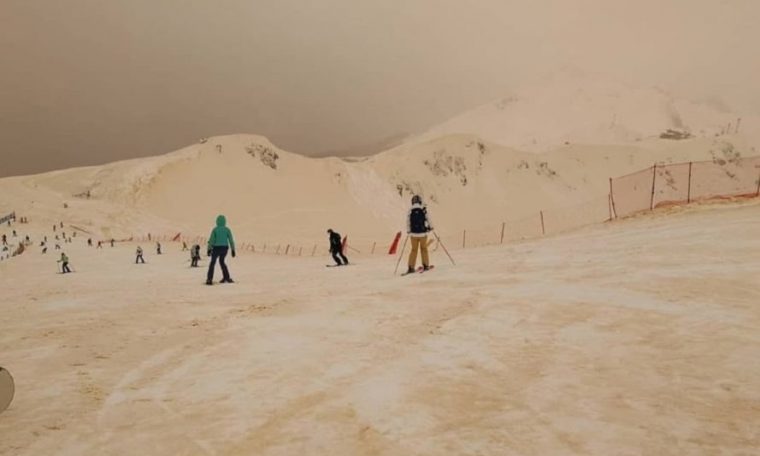 On social networks, many tourists have published images of snow-capped mountains in Eastern Europe, all tinged with orange. The images are going viral as they are fast shared around the world. In the last few days, in many mountains in Eastern Europe, heaps of orange snow have covered the ski slopes. In Russia, Bulgaria, Ukraine, Romania, and Moldova, tourists were able to see a unique event.

“Today, we are skiing on Mars!”

In this “apocalyptic” landscape in many Eastern European countries, some found the time to laugh about the odd orange snow that covered the mountains.

On Twitter, one user even said that “today, we are skiing on Mars!”

But what is this phenomenon due to? Is this orange snow a premiere?

The color of the snow has been changed to sepia because of the sand from the Sahara. Recent storms have carried the sand and dust from the Sahara into the clouds above Eastern Europe.

“Looking at the satellite images of NASA, you could see a lot of sand and dust drifting over the Mediterranean. And when it’s raining or snowing, it drops everything up there, even if there is sand in the air,” said Steven Keates from the British National Meteorological Institute.

Other news sources even indicated that pollen particles were also present in the snow, along with the sand from the Sahara desert.

Clouds full of dust over the Balkans

A few days before the orange snow came to draw all the attention in Eastern Europe, the Balkans experienced a violent climatic episode. The Saharan winds laden with sand have indeed swallowed the Greek island of Crete in a cloud of rusty-colored dust, limiting visibility.

According to the Athens Observatory, which has studied African dust concentrations over the last 10 years, this episode was one of the largest sand transfers from the Sahara desert to Greece,” notes National Geographic.

These episodes are not common but also not rare as they happen only when massive storms and powerful air currents lift the sand from the Sahara desert up in the clouds which are then traveling to Eastern Europe, in special. However, orange snow is quite a rare happening and, even more, has a great visual impact.