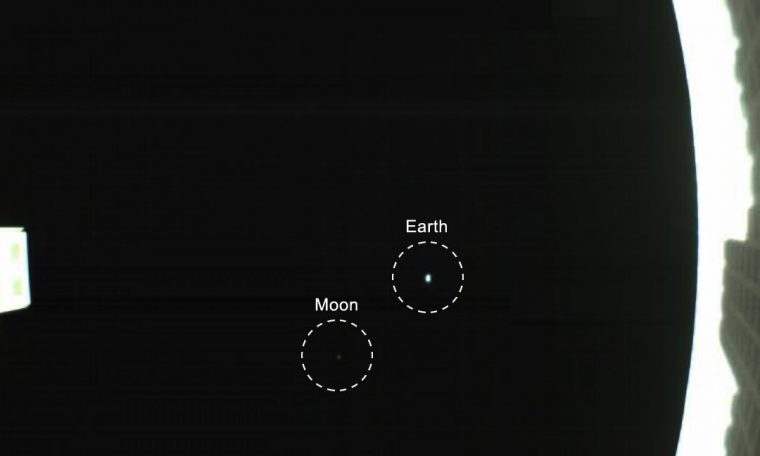 Back on May 5, two NASA CubeSats were launched into space along with the Interior Exploration using Seismic Investigations, Geodesy, and Heat Transport (InSight) lander. The CubeSats were developed at NASA’s Jet Propulsion Laboratory.

The twin spacecraft is already setting records in space. They reached an impressive distance, which is the biggest one or CubeSats. At the moment they are moving away from our planet at a range of 2.9 million kilometers.

Back in 1990, The Voyager 1 took a picture of Earth, and this image was known as the “pale blue dot.” The photo taken by CubeSat is very similar to that iconic image, and even the team admitted that this is more than just a coincidence.

“Consider it our homage to Voyager. CubeSats have never gone this far into space before, so it’s a big milestone. Both our CubeSats are healthy and functioning properly. We’re looking forward to seeing them travel even farther,” said Andy Klesh, MarCO’s chief engineer at JPL.

Since 2000, almost 1000 CubeSats have been launched into space. They offered cheaper access to space to universities, governments, and other commercial companies. The size of a CubeSat varies, but they are all based on a cubic “unit” that measures around 10 centimeters on a side.

At first, it was challenging to fit all the needed functions into a small spacecraft. “We need to be able to communicate, to navigate, and to be able to maneuver in the deep space environment,” Klesh said. Nonetheless, the CubeSats won’t be the one to influence the landing.

When it comes to transmitting data, InSight will be the one that will send data during its entry, descent, and landing up to NASA’s Mars Reconnaissance Orbiter. The information will be stored and sent back to the ground.